This week the entire team was blessed by our family at Foot Locker Canada with a very impressive care package that included adidas’ newest and sleekest silhouette – the Nite Jogger.

We opened the cardboard shipping box to a massive, bubble wrapped, package, which obviously peaked our interest right away. After some un-wrapped, we were presented with a matte-black, plexiglass box that read “ONLY OPEN AFTER DARK.” Obviously, we don’t listen to rules, so we cracked open the lock on the front, and immediately opened the box. Once it was open, the interior of the box read:

“There’s never enough hours in the day. That’s why you’ll find everything you need in this box to make the most of the night. Because these dark hours bring the best projects to light. Nite Jogger by adidas Originals – the only sneaker for the late-night creator. So wake up, lace up, listen up, and stay up. Because it’s never too late.”

Also inside the box was a comic book by KickPosters artist, Dan Freebairn. The details and quality of packaging was already enough to have us drooling; and we haven’t even gotten to the shoes yet!

The Nite Jogger itself is adidas’ newest addition to their already extensive repertoire of cozy lifestyle sneakers. The silhouette finds itself right in the middle of an adidas I 5923 (Iniki Boost) and an NMD. As someone with a relatively flat foot, I can appreciate the Nite Jogger’s flatter midsole, an improvement from the very heavy wedge shape found on the NMD. The upper is a mix of knit and suede, sealed with taped seams, and set off by strategically placed hits of 3M reflective materials. The theming gives off extreme ninja vibes, and on-foot these are money.

The fit of the shoe is slightly big. They fit similarly to an adidas NMD, or a half size down from a sneaker like a Jordan 1. Comfort, of course, because of the full-Boost midsole, is next level, and we can say that they’d be an awesome shoe for everyday wear. 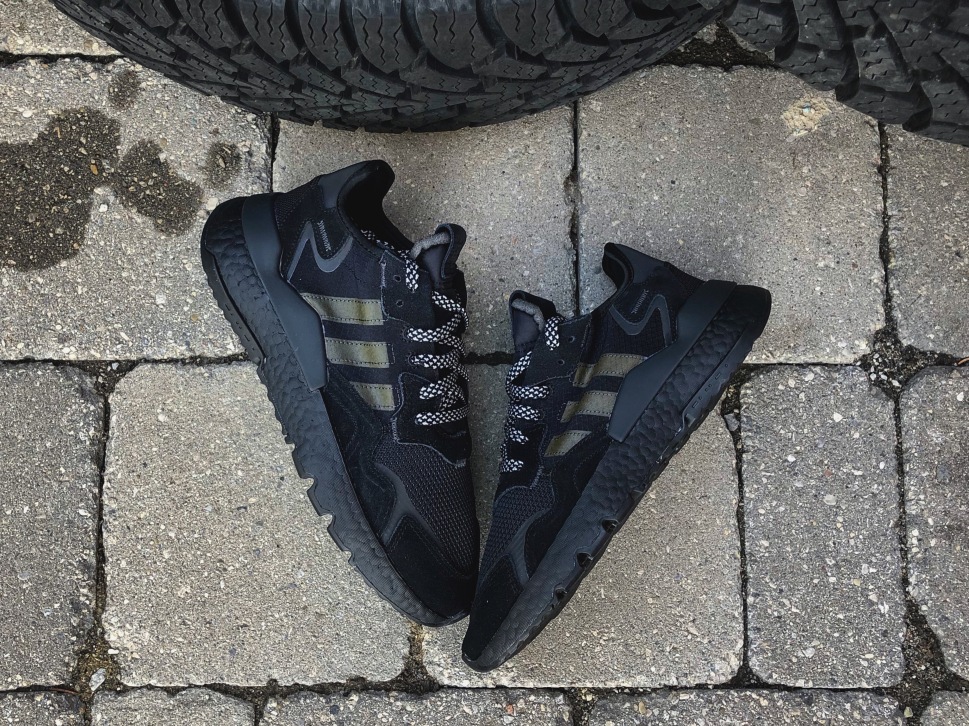 If their track-record has been any indication, we can assume that we’ll see our fair share of colourways, collabs, and iterations of this ultra-comfy shoe – and we’re not mad at it. You can pick up this super sleek, triple-black version and several other heaters right now on FootLocker.ca or at your local store for $170.00CAD!